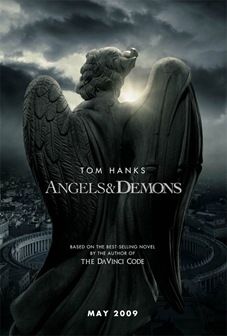 Last weekend I watched Angels and Demons (at Sreedhar Cochin), not because it was penned by Dan Brown, not because it was the (technical) sequel to Da Vinci Code or not because it had run in to controversies, but because if I missed this, then my curiosity won’t let me be. So I gave it a go. But honestly the movie fails to thrill you like Da Vinci Code, it tries much but in vain. I haven’t read the book prior to watching the movie, for those of you who did, you wouldn’t expect much from this flick as its all down on paper. I must say I was lucky not to have read the book or else, I would’ve let myself go whatever remained of suspense and juice in the movie.

I don’t want to dare go into the story, but one thing I missed in the movie was the dark side and the villains. They were so flimsy, though there is a beautiful element of surprise towards the end. My wife easily guessed the suspense from the look of it right from the first half she said, but I couldn’t. So much for the good part. Rest everything about the story is plane boring, not enough controversies, not enough suspense and no thrill.

Wanted to ask the director this Q. What was he thinking about the car chases ? Every time the Vatican police and Tom Hanks jumps in to those SUV’s (Dodge I suppose) and speed through the streets, there is a blaring music, upbeat stuff which I liked very much.. but you didn’t have to repeat it all the time. And a college professor speeding through the streets in an SUV is far from charming unlike a James Bond or FandF. Need I mention that there was none chasing them !

On the whole, the movie is a plain one. No thrilling stuff except the “kahani mein twist” part. But you don’t want to miss this one, or you’ll feel ashamed later.