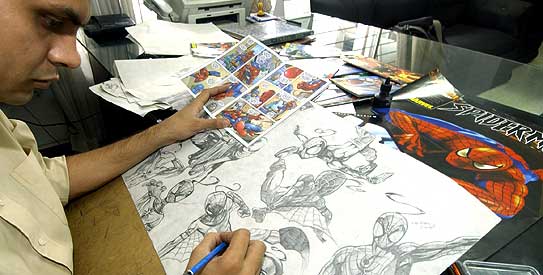 Animation industry has grown a great deal in India and offers numerous job opportunities for aspiring candidates. 2D animation, 3D animation and visual effects is the main medium for featuring animated movies in India. This industry has prospered mainly due to the large supply of workforce available and the low production cost. The government has been pretty supportive and as such this industry is advancing positively.

Top animators are working in India and have produced beautiful animated works over the years. You can see that their works are at par with international standards and continue to amaze its viewers. To motivate and bring out fresh talents they have also introduced awards like Annual Graphics and Animation Film Awards (AGAFA) where awards are presented for best graphics, animation with purpose and many other titles. Maya Academy of Advanced Cinematics have also organized competitions in animations for students to showcase their talent.

The Pentamedia Graphics has been offering its services since 1976 and it is stationed at Chennai. Earlier they were running by the name of Pentafour Software and Exports and in the year 2000 they changed their name to Pentamedia. They acquired Media dreams, another software company dealing in animation work in television. The company has its headquarters in Manila as well as Singapore. Over the years they have had a great contribution in 2D, 3D, visual effects and even post production services in India. Some of their contributions in this field include Gulliver’s Travels, Pandavas – Five Warriors and Sindbad: Beyond the veils of Mists.
Official website – Pentamedia

Toonz Animation has its headquarter in Trivandrum and they have a good number of works in their basket. They have Disney, Hallmark, and Paramount in their client list and has become very popular in the Indian Industry. Their animation projects include VFX,a 2D, 3D, flash, digital and slow motion. Their workforce of over 600 people and their quality of work is par excellence. Some of their popular work on TV include Adventures of Tenali Raman, Return of Hanuman and in movies they have the 2D/3D version of Tommy and Oscar. Due to their good contribution in the animation industry they have been ranked among the top 10 multimedia studios in the world.
Official website – Toonz

Maya Entertainment is stationed in Mumbai and has been contributing to the animation industry since 1995. They have a big client list which include BBC, Sony, Google and Rainbow. They have a workforce of over 400 people and generate an annual income of 1 billion. For the projects undertaken, they have also won prestigious wards like GDC, FICCI, Pulcinella and BAFTA . Their blockbuster work in the movies include The Mummy and Stuart Little. They have also worked along with the United Nations on a short film with a character called Wabo. The whole idea of this project is educate the consumers on the importance of conserving water.
Official website – Maya Entertainment

Heart Entertainment is situated in Hyderabad and has earned a good reputation in the animation industry. Walt Disney is one their top clients and they have popular series called Hercules which runs on TV. Some of their other works include Warner Brother’s “Histeria” and Tommy Nelson’s “Crippled Lamb”. Apart from animation work they are also actively involved in educating and bring out fresh talent with their own Heart Animation Academy.

This is another division of the popular UTV Software Communications Ltd. They have come into the animation industry from the year 2000 and is based in Mumbai. They have successfully bagged clients from all over world including North America, Asia and Europe. Some of their achievements include the Club Now which is a musical cartoon series and The Doonz which is a fantasy series for the Dutch clients. Others include the Clootie& Dumpling” is another Canadian series and Snow Queen for the Luxemburg clients.
Official website – UTV Toonz

Padmalaya Telefilms have made a considerable progress in the entertainment industry. They are a subdivision of the Zee telefilms and have had their work spread-out in South Asia. They have created 104 cartoon episodes for US$ 14 million. British animation companies like Mallard as well as Ealing animation are in talks with this animation firm. They have made a strong reputation for themselves and their greatest achievement would be the tie up with the Los Angeles Club who are involved in 2D as well as 3D software development.
Official Wiki

Headquartered in Chennai the Nipuna Services look into VFX, 2D, and 3D animation. They are a subsidiary of Satyam Computer Services and have created their niche in the animation industry. They have signed a contract with a German animation company 4K Animation GmbH for US$ 8 billion. Some of their popular clients include New Zealand based Applied Gravity and UK based 4K animation. Other highlights include animation projects for New Zealand theme parks and even the animatronics dog which featured in Animal Planet’s series K9 to 11.

Jadoo works has worked on animation mostly concerning mythological characters like Lord Krishna. Their concept has been to bring out the culture of India both in the present as well as past. Their clients include the Wild Brain and Guardian Angel Animation (GaGa) which are some of best animation studios in US. Their strong foreign presence give them ample projects and some of the foreign companies have also outsourced their work to them.

They entered the animation industry in year 1990 and had clients both in US as well UK. They were stationed in Mumbai but their production houses continued to be California. Some of their popular work is “Jakers: The Adventures of Piggley-Winks” which won the Emmy in the year 2002.They have also produced the Sylvester and the Magic Pebble which is their forthcoming attraction.

Silvertoon gained its popularity with the animated series Hanuman which was aired for 135 minutes. This mythological character was a huge success among the kids and had a huge fan following too. Some of their other works include the “The Adventures of from the Book of Virtues” which was also liked by all. It is located in Mumbai and this studio has managed to draw contracts for animation with US as well UK firms.

Do you know any animation studios that are worth mentioning here? Please let me know in comments.