Buying cheap tickets to India is always a hassle, but not impossible. I did it, and so can you. Knowing the right tips and tricks can always get you the best deal and cheapest tickets. Here’s how. Before continuing to book tickets to India, there are some facts you need to know.
Related: 10 Websites to book cheap flight tickets to India.

– Flight ticket prices fluctuate all the time based on several factors like peak and off season rush, seasons, festivals etc. i.e there is no fixed price.
– However at any point, one ticket to the same place for the same person can be bought at difference prices from agents and airlines at any day. This is because the same tickets are sold at different rates to agents and airline official counters. Ex: A flight ticket from San Francisco to Delhi can be charged $800 when bought via a travel agent while for $1000 directly from the airline.
– Tickets are mostly cheaper buying from travel agents compared to airline offices, however during certain times like rush season, this can change.

How to book cheap flight tickets to India?

First off, you should know that time is a crucial factor in determining the price of your flight ticket. Booking a flight to India is the same as booking a ticket to Frankfurt. It’s all about timing, not the place

The best time to book a flight ticket from USA to India (or India to USA) is 54 days in advance (7 and a half weeks). Studies have proved this.

So, let’s assume you want to travel in March, the best time to book the ticket will be mid of January. Let’s test this out.

This is probably the most confusing part for anyone trying to book a cheap ticket to India. If I’m not mistaken, there are at least 5 websites that promise cheap airfare. But are they really offering the cheapest flight tickets? Let’s take a look.

I looked for the same flight on the same day across different portals that promised to offer cheap air tickets.

Here is the details of my flight search.

So, comparing all these results, the following things are evident.

1. Buying the ticket from a travel agency is cheaper than buying from the airline themselves.

2. If you’re not bothered about total flight time and layovers, there is a slightly cheaper ticket available always. But for ~$100, you’ll be wasting almost 20 hours of your time and dealing with layover hassles.

3. If you’re flexible with the dates, there is always a better deal on workdays (Mon – Thursday).

4. Avoid booking on Fridays, Saturdays and Sundays if you are price conscious.

5. Booking a round trip will get you cheaper rate when compared to one-way trips.

Let us try and search for the same trip on a workday (Monday) and see if it changes the price significantly.

So, comparing all these results, the following things are evident.

1. Buying the ticket from a travel agency is cheaper than buying from the airline themselves. (British Airways charges ~$200 extra for the same flight.)

2. British Airways, Cathay Pacific and Emirates have the cheapest rates and the layover is comparatively lesser (compared to Singapore Airlines etc).

Out of all the sites I checked, Hipmunk, Kayak, Indian Eagle and Cheap Fare Guru has the lowest rates. Expedia has some competitive rates but they do not search all airlines, I guess they do not have tie ups with some of them.

What I like about Hipmunk is that it let’s you visualize all flights in one go and let’s you choose the best flight based on either price or layovertime. 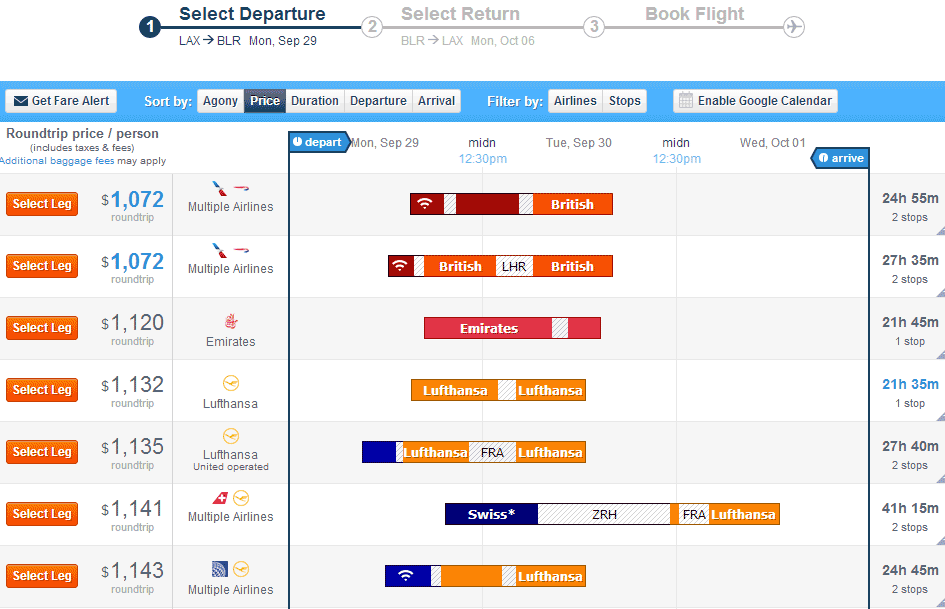 Tips to get cheap tickets when you travel

– Book tickets on Mondays through Thursday, flight tickets are much cheaper compared to weekends.

– Try to book round trips in one go rather than booking each one way separately, which will be expensive.

– Some websites like Expedia do not have tie-ups with all airlines, so even though they might give you cheap flight tickets, always compare with other search engines.

– After you have got the cheapest fare on one of the above mentioned search engines, call up your accredited local travel agent and ask if they can get you cheaper rates. Most of the times, they have undisclosed fares and they are willing to undercut the competition. Although they will not disclose their lower rates in public or on their websites.

– Emirates, Cathay Pacific & British Airways have significantly shorter flights. Even though they might not show up on the cheapest flight list, they are only expensive by a few dollars. For the convenience of time, I wouldn’t mind paying a little. Also, some of them have excellent service.

– When trying to book flight tickets online, try to clear your cache of the browser or go “incognito mode” on Google Chrome. The reason is that most of the flight ticket websites store information as cookies in your browser, so they give prices based on your recent searches etc. When going incognito mode, they don’t have this information and might get you cheaper prices.

Best airline to fly when traveling to India

So, this is a tough question because a lot depends on personal preferences. Do you like to travel with ease, do you want to have a good in-flight experience, do you mind layovers etc.

I’ve traveled in the following flights so far and here are my thoughts. 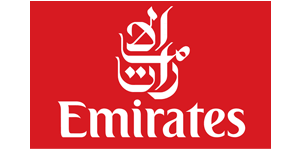 By far one of the most easiest and convenient flights because of multiple reasons. One, the flights are shorter, typically around 20 – 24 hours, thereby I don’t have to waste my travel traveling and can save up on holiday time. Many flights that offer cheap flights comes at a price. Their flight times are typically 40+ hours and there are multiple layovers. I hate layovers.

But with Emirates, there is only one stop – Dubai. And I love Dubai! It is probably one the best airports (and busiest) I’ve ever been at. Super fancy and amazing in every way. Great shopping places in the airport makes it a preferred destination (duty free) and also it is easy getting around the places there.

Not to mention the crew and great in-flight experience! Emirates always has great food and super-friendly staff. Oh! Plus their inflight entertainment is awesome (they have the widest entertainment channel selection)! 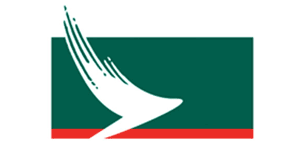 Probably my next preferred flight because of two reasons. One their flights are short with a single layover at Hong Kong. And Hong Kong is a nice airport as well. Probably not as fancy and cozy as Dubai, but it’s good. They have free Wi-Fi throughout the airport and it actually works unlike many airports. They have a pretty nice duty free shopping area too, not even half as many options as in Dubai but still, pretty decent.

In flight experience is decent too and the staff is good. 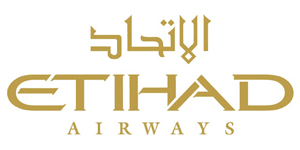 Etihad is in many ways similar to Emirates with layover in Abu Dhabi. Flight time is pretty much the same as Emirates but the inflight experience is probably not as good. Also, they don’t have as many flights as Emirates and the airport is kinda ok-ok. They have internet kiosks (where you have to queue up to get access) but no WiFi. I’ve had some trouble with the immigration folks there too (probably personal but still worth a mention).

So there it is, if you’re preparing to fly from USA to India any time soon, keep these tips in mind and hopefully you’ll get the best deal. Last advice, do not buy in haste. Shop around for a good time before you lock in on something good.

✅ How to Buy Medicines Online in India – 5 Best Websites/Apps

✅ 10 Best Places to Visit in India in May

✅ 10 Easy Ways to Send Gifts to India from Abroad

✅ Top 20 Things To Do in India For Visitors

✅ How To Send Gifts To India From USA

6 thoughts on “Hack To Book Cheap Flight Tickets to India”

👉 How to Buy Medicines Online in India – 5 Best Websites/Apps