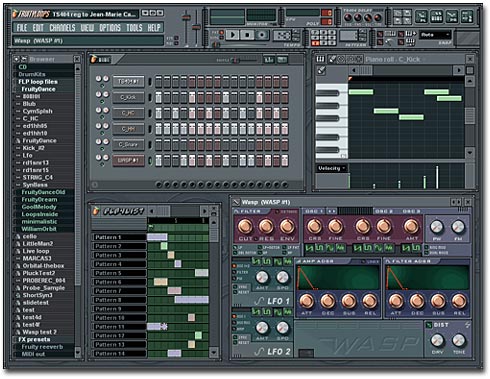 Previously if we had to create music, we needed the corresponding instrument, play and record it – tedious job. Nowadays, music produced by the instrument can be simulated very easily on your home computer and we can create music effortlessly and easily with just the punch of a few buttons.

Supported OS : Windows®, Mac®, GNU/Linux®
Audacity is not only used for editing audios but also used for creating music and it is a open source software under GNU General Public License (GPL). The main features are Recording live audio as well as windows playback,changing the pitch of the recorded music,creating built-in effects like phaser,reverb etc.

Ardour is an open source software used for recording,editing and mixing music. The features include Unlimited Multichannel Tracks,importing in many file formats like WAV,BWF,CAF ,solo or listen model,routing,mixing,stereo panning,exporting to many formats etc.

Supported OS : Windows, Mac, GNU,Linux
CSound is one of the oldest software developed in the 70’s for creating music.Even though it uses a text commands and not UI for creating music, it is most powerful in doing synthesis and processing of the sound.

Acid Express is a freeware for recording,editing and mixing music and the features include Inline MIDI editing,Multiple events per track,encoding Mp3 files,matching the tempo and pitch of the music etc.

FL Studio is a virtual studio for creating music and is developed by the company Image Line Inc. Its features include Audio editing & manipulation,mixing,Multi track recording,Plug-in support,Sequencing,Synthesizer,Support for MIDI input and output etc.

Rosegarden is a free music composition and editing software for Linux based systems.The features include recording,mixing,sampling,synthesizer,adding effects to the music,Support for MIDI input and output etc.

Magic Music Maker is best suited for upcoming artists or people who are new to music and is used to create your own music. The features include recording,mixing,sequencer,sampler,synthesizer,MIDI support,importing many file formats,adding effects etc.

Quartet X2 Music studio is one of the latest software for creating music and the features include 12 channel instrumental composition tool,recorder,mixer,MIDI support,themes,background music etc.

Virtual DJ is used for recording,mixing and editing music. It supports a wide range of file formats.The software is available in various versions like Home,LE,Pro Basic,Pro Full etc.

Soundplant is a simple software for creating music using the virtual keyboard available in it and it supports various file formats like WAV,MP3,AAC,FLAC etc.

Sequel is an efficient and multitasking software which is used to create your own music and has features like recording,mixing,applying sound effects,adjusting musical balance etc.

Songtrix Silver is designed especially for composing music and is a good tool for the beginners.It has features like recording,mixer,MIDI sequencer etc.

Acid Pro is developed by Sony Creative Software Inc, an US based company and has features like multitrack recording,loop based music creation,MIDI support,mixing,Synthesizer,plug-in support,adding effects,routing etc.

Wired is Linux based software for creating music in a professional manner and it is under the GNU General Public License.It has features like recording,mixing,synthesizer,MIDI support etc.

Able MIDI editor is a simple software for creating your own music and saving it in MIDI format.