Hi everyone this is the Samsung gear 360 camera review, the latest gadget from Samsung. See those super cool rotating videos on Facebook? Yes, this camera can shoot it easily. 360 degree cameras are quite the rage these days  (after drone) and Samsung offering a product is quite good news. Although there are several cheap products out there, I’m assuming this product, coming from Samsung will be quite a game changer, err.. well at least a better product.

Samsung Gear 360 Camera – What it does 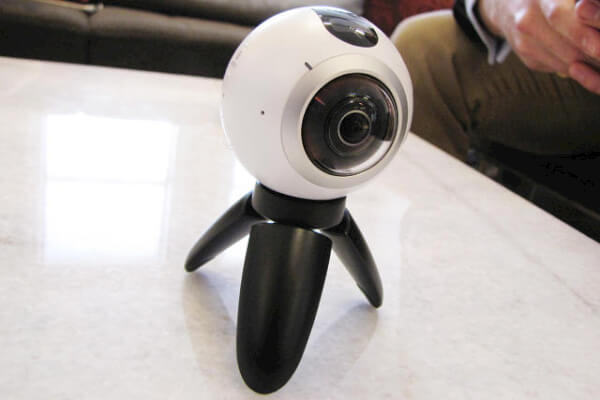 As you might have guessed, this camera shoots 360° photos and videos. Now we had heard that Samsung might be bringing something like this to market but I wasn’t expecting it to be something this small and this consumer friendly. It looks cute, doesn’t it?

It’s obviously working with 2 N’s system which is becoming more more popular but this 360 degree camera has an F 2.8 lens on it and it shoots 195 degree field of view. So, the loop image from one side and the other side actually overlap. That’s important when you’re sticking those photos and videos together. It makes the quality of image little bit better and it means that each side can be a little bit higher resolution. The camera is going to be able to shoot the equivalent of a 30 megapixel still and 3840 x 1920 video. It’s a little bit disappointing compared to the kind of 4K video capabilities new cameras in the market has, but it’s still going to be good enough for 360 videos. The video looks pretty decent for a consumer level camera. You can also share to Facebook YouTube or any other platform that’s been supporting native 360 video directly.

Samsung says this is going to be released a little later this year 2016 probably. But I don’t know exactly how much is going to cost.  Speculations are that it will cost around $300 but we will have to wait to know more about it.