What’s the next big thing in Android mobile space? The Samsung Galaxy S4 without any doubt.

Samsung Galaxy S4 is rumored to be out in the market pretty soon, and has all the Android fans raving about it already.

Chennai is one of the most popular markets for Android phones in India, along with Bangalore and Delhi. Probably it is the tech crowd here that makes this possible, but it looks like all the mobile phone shops in Chennai are ready to welcome the Samsung Galaxy S4.

Let’s take a quick look at the features of Samsung Galaxy S4. 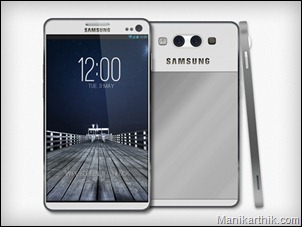 The Galaxy S4 is supposed to be having an amazing AMOLED display. The Galaxy S2 had an amazing Super AMOLED Plus display. The S3 improved the screen size from 4.3-inches to 4.8-inches and the pixel density went from 217 to 306. The S4’s display is going to be taking over the iPhone’s retina display, or so it is rumored. The specs revealed at CES 2013 was a 4.99-inch screen with a Full HD pixel count and a dizzying 440PPI resolution.

A quad core chip, a flash memory with almost double speed and four times the storage capacity. Battery power for the Samsung Galaxy S4 is predicted to be better than the S2 and S3, obviously. 1,650mAh was Galaxy S2 and the S3’s 2,100mAh, so what will be the S4s? Let us wait and watch.

At this point, we do not have exact details of how much it is going to be. But rumors are that it is going to be somewhere around 35-50,000 Indian Rupees. Univercell, Sangeetha Mobiles and Poorvika Mobiles did not have any word on the price yet. I’ll update as soon as there is something solid.