How about a social network for the civilians by the Government?

With a new social network been developed every other day on the internet, I think we have run out of options to really make use of it. Today, there is a social network for school kids, one for girls, one for the youth as such, one for finding your family pedigree, one for your official networking, one for your pets even. So it’s kind of breaking into all the possible niches. The fun is that everywhere, there is a major chunk of users who are common to all the networks.

With all the frenzy and hulla-bulla around social networks, I guess there is enough scope for a new social network that will integrate all this into one big umbrella. I’m talking about a social network from the Government for the civilians.

I mean seriously, thinking ahead 5-10 years, I’m hoping that this is a possibility, just that the think tanks at the administration is not yet aware of the scope and success of the social networks online. 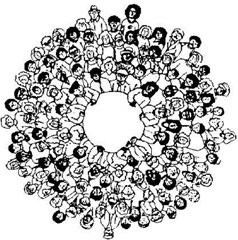 A social network by the people for the people. It will have all of profiled already based on our known (publicly) credentials. Like place of birth, date of birth, education, skill levels, work info, social status, social background etc.

This is a very crude form of thinking, but if you dissect it further you’ll see much scope for a helpful social society as such.

Imagine if you could apply for your ration card/credit card online through your social network.

Imagine if others could recommend you for a new job position you applied for?

Or imagine if you received offers from all the local schools to your child’s admission, whose profile is mapped under you?

A little too much imagination eh? Well, the idea is that if the entire social network is under the control of the Government, they could fill in the gaps the social networks right now miss. Like the vital information about a person (which can be opted in by him to be displayed or not on his profile).

Of course, there would be the risks,

– Of privacy and data theft.
– Of terrorism and anti social elements.
– Of developing a information dependant society.

I’m assuming we can make it all safe and sound as we are dealing with it on a large scale and under the governments surveillance.

Well, for all the developers and IT kids out there, food for thought. Hope it made some sense.

Which is the best satellite television in Chennai?