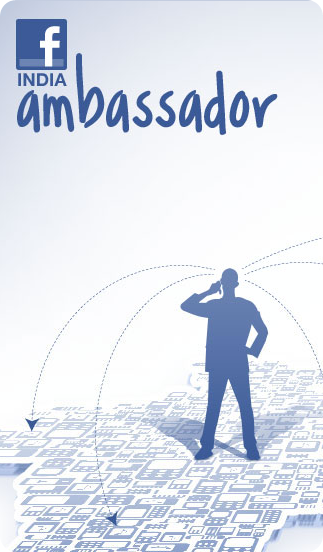 If you’ve been sharing a sour relationship with your relatives so far, this is the time to repent and reconnect. Why? Because Facebook calls on a revolution, one that of an open and connected world than never before, and you are joining in. Been living under a rock hah? Go check this out quick – Facebook Ambassador program.

Seriously. You’re not going to repent reaching out to your friends and relatives you’ve not been in touch with recently. Because, if you manage to get them to use Facebook, boy, you could be the Facebook Ambassador! No, it won’t sign you a million dollar contract with Facebook, but it is sort of a big deal, that’s all I know. Like being world famous in India (something like that.)

Facebook is all set to make this world a better place, and this one is their latest endeavor, so without the slightest doubt or silly second thoughts – I’m all in.

So, cut the crap. Here’s the deal.

Step 1 – Go down the memory lane and come up with a list of folks whom you’ve not been in contact with recently. (This is under the assumption that your near and dear ones are already on Facebook and now you got to “hunt” for others, the less privileged or educated ones.)

Step 2 – Figure out ways to connect with them (Don’t ask your relatives already on Facebook, or you’re going to give it away!).

Step 3 – Connect with them (possibly directly), tell them how you missed them all this while blah blah blah…and slip in the idea of staying in touch again and pitch in this cool new social network idea. Easy peasy I tell you, they’ll fall in.

Step 4 – Be a little more nice. Install Facebook on their mobile phone and teach them a lesson or two how to share motivational quotes and funny kitten pictures.

Step 5 – Submit yourself to the Facebook Ambassador program, give in the list of your relative/friends and their numbers whom you’ve converted so far.

You got to wait I suppose – to know if you’re an Ambassador or not.

So, what’s the cheat I mentioned earlier?

Well, get as much as data as possible. That’s the trick. You think Facebook cannot buy the entire cold-calling database in India? For sure they can. But that’s not the idea here. You got to build a fresh new one from all the untapped data sources until now. And where is the gold? Mobile phones.

Guess which country has the largest number of mobile users in the world? Well, it is China and India is second. There are about 934 Million (Close to 1 Million) mobile users in India, that’s about 76% of the whole population.  Source Wikipedia.

Facebook is eyeing on that number dude. If they hit 1/10th of that number, they’re all set for a grand party!

So, coming back to the cheat and how you can become a Facebook Ambassador.

If you manage to add all your school buddies (Hell! Go to that Alumni meeting you’ve always skipped), apartment association members, friends and relatives of everyone you know, you should be in a good position to be the Ambassador.

If this source is to be believed, there are about 52 Million Facebook users in India. Assuming that not all of them are on Mobile phones (there is a difference between using Facebook on Mobile and verifying your number with Facebook.) this is a very bleak number.

If you can refer at least 1000 new Facebook users (verified via their mobile phones) I think one can easily be the Facebook Ambassador. (No maths here but just plain educated guesses.) But folks, think about the quality, not quantity.

Don’t go around rigging the system with adding in mobile phone numbers from a cold-call list. Even though the system looks simple, I’m sure your efforts could go futile if the numbers aren’t verified, or if its not an original first time Facebook user. There is going to be lot of data leakage with this referral system, but that’s exactly what Facebook want I suppose.

Anyways, way to go Johnny! All the best.