Is Blackberry losing the game with the big boys?

One – What’s the f*cking game?

Well, irrespective of who the big boys are and what the game is, Blackberry seems to be losing its charm and popularity. Don’t get mad at me, that’s what statistics say.

A Google Trends chart shows that Blackberry is losing its popularity compared to Android, iPhone and others. 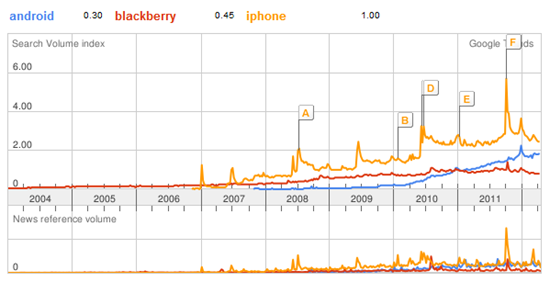 The red line is Blackberry and it hasn’t been gaining enough momentum as the rest of the guys. Android on the other hand is gaining popularity ever since its friendship with Google and is soaring high. In fact, its about to take over iPhone in the near future. iPhone on the other hand, although the leader in popularity, is not showing healthy signs of growth. The sudden spikes oddly stand out and give more of a super star performance with ups and downs, compared against a very stable organic growth of Android.

Of course, this is only a search volume index, and does not show the market positions of any of the above mentioned brands. But these sure are indications of audience perception and interest. The striking fact is that if more people are searching for iPhones as a result of a news announcement Android is making organic growth steadily – without any news boost (or very significantly less).

Anyways, it’s a fact that Blackberry has a continuous and loyal fan following, and no matter what, many folks stick to on Blackberry and plans to keep it as their preferred communication device (like this).

Everything said and done, loyal fans or not, Blackberry is less bright today as it was yesterday, and significantly enough. Hope it doesn’t fade away to oblivion, that will be hard to see.

Google, I hope you win. But its been all wrong moves lately.