Make A Difference – A good effort worth supporting

Thanks to Kenney for introducing me to this foundation. 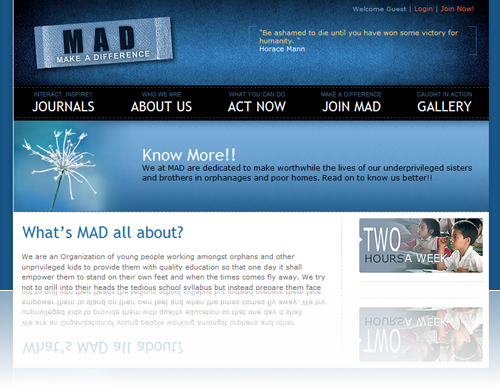 I want to introduce you to the most wonderful NGO in the world, which was working right under our noses and still we failed to see how they were Making a Difference

Make A Difference (M.A.D) is a youth volunteer network that currently functions in the three cities of Cochin, Pune and Chennai… 312 volunteers teach more than 1200 underprivileged kids English and computer skills in these three cities to enable them to have better career prospects…
These children live in street shelters and orphanages. Without proper guidance, their lives will go astray. MAD makes sure that they have the proper life skills to make it in life. Then MAD tries to get them placed at jobs where they can live their potential…

MAD was recently picked as one of fifteen finalists for the international Youth Social Entrepreneur Awards which is a prestigious award bestowed by the Ashoka group. MAD became the only Indian entry in this competition in spite of 521 nominations from 60 odd countries. The final winner will be picked by online voting.

Let’s try and bring pride to our country by spreading word about the achievements of our countrymen. To stand up and be recognized in such a multi-faced international crowd is an achievement in itself.

Why girls are evil