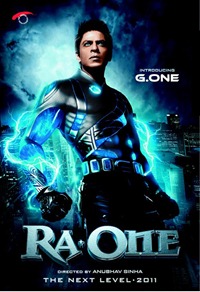 One day, aliens will land on Earth to give us the answers to the secrets of the universe. But, because of films like Ra.One, they will deem us unworthy and return to their planet. And we will still live in a world where uninspired cinema burns wallets.

Ra.One is the marriage of Bollywood’s least attractive couple—star power and unoriginality. This is a shameless rip-off of every single iconic science fiction film; all it’s missing are the likable characters, good performances, and the action. A majority of the film centres around cheesy videogame-babble; a lame attempt at romance between leading stars Shah Rukh Khan and Kareena Kapoor; and a bizarre climax that reeks of desperation. After two hours and 40 minutes of this, even atheists would want to storm Buddhist monasteries in the hope of finding an oasis of serenity.

Despite its huge budget, Ra.One neither excites nor even entertains. It exists to move merchandise. Khan is no stranger to cornball excess, but Ra.One is his chef d’oeuvre. It is alarming to be underwhelmed by a movie where Shah Rukh Khan deploys two guises and elaborate futuristic sets to no particularly memorable effect. Rarely has so much money delivered so little entertainment.

So what’s wrong? For one, the big CGI action sequences pack the entertainment value of ditch water. The noise is so headache-inducing that we welcome even the silly dialogue that forms most of the movie. The comedic attempts have the capacity to put viewers into a catatonic state; the jokes range from crass to shrill to vulgar. Khan tries to pull his car keys out of a woman’s cleavage. A male security guard makes Khan take off his shirt, and licks his lips seductively at the sight of the hero’s pierced nipples. Khan also fights with three scantily clad Chinese women named Iski Lee, Uski Lee and Sabki Lee. Even by the degraded standards of dim-witted blockbusters, this is sorry stuff. 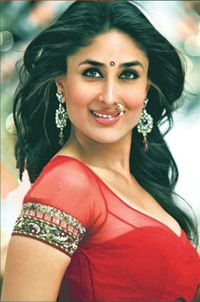 The plot veers from boring to idiotic and slapdash. Khan plays Shekhar Subramaniam, a video game developer who invents a game with a villain so powerful that he comes to life and murders his creator. Enter the other Khan, G.One, who had been assigned by Subramaniam to protect his wife (Kapoor) and son, and kill the villainous Ra.One (Arjun Rampal). There is not an ounce of originality from this point on. Ra.One shifts shapes and regenerates like T-1000 fromTerminator 2; and he has an electromagnetic heart like Iron Man. G.One saves a train just the way Spider Man does; and he fights with Ra.One in Mortal Kombat-esque levels. It’s not new. It’s not interesting.

What really hurts is that none of the characters matter. They seem to have been bought out of a cinematic thrift store. Kapoor looks gorgeous, but her character is aggressively dumb and blissfully unaware of it. The talented Shahana Goswami, woefully miscast as Subramaniam’s colleague, delivers her lines as if her mouth and her brain live in different states. While Khan as a South Indian makes you cringe, he is a lot more likable as the hero G.One. But he is still required to chew on the driest of dialogue, and to strike poses in a suit that makes him look callow rather than heroic. Rampal, on the other hand, looks more like a contestant at a costume party instead of a frightening villain.

So little of real consequence is at stake that you’ll have plenty of time to notice not one but two dozen plot contrivances. In one scene, Subramaniam uses his fingers to eat spaghetti with curd, just to highlight our hero’s South Indian heritage. Where are laugh tracks when you need them? Of course, one cannot expect much logic in a film where a video game comes to life, it’s just that the thrills in Ra.One are almost apocalyptic in their stupidity. The big action scene on the Mumbai local train is a total and complete misfire of intention and execution; and there is little to recommend here beyond the Rajinikanth cameo, unless you like your Khan-endorsing, flag-waving fanboy jingoism taken to the extreme.

It’s hard to completely hate this movie, hokey as it is, because you still want to root for the good guy in the end. But you can’t help but wonder why Khan didn’t save himself a lot of time and money and just make a video game instead of a movie. Ra.One is a scandalous waste of cinematic resources. It is a movie that seems proud to be imbecilic, loud and inconsequential.