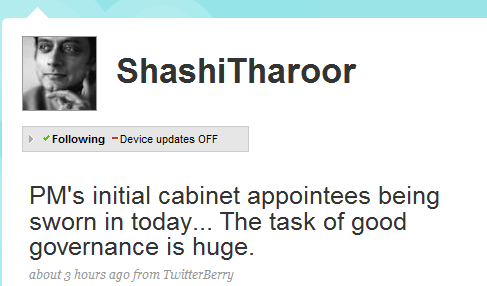 Looks like it that Dr. Shashi Tharoor’s efforts, and the hopes of all the people who voted him especially the ‘one lakh’ who helped him win is going to get extrapolated from tomorrow as Dr. Tharoor is a “special” candidate in more than one way, and the fact that he’s not becoming a minister now.

– He is the only candidate (and now MP) who Tweets. (http://www.twitter.com/shashitharoor)

– He is the only politician to have “come down” the ladder from UN Under Secretary post to an “elected” MP status, following his passion.

– He is the only young politician from Kerala who have been (unnecessarily) ridiculed over his attire/slang/mannerisms.

A lot of hopes and prayers are with the man while he sets foot in the Parliament. But his recent exclusion from the cabinet and the numb replies from the official circles on him not becoming a minister has poured water over fire.

To me, this man carries with him quite a bunch of hopes and aspirations, mine and many likes in Kerala. He talks, walks and thinks like a man who can bring in the difference. He is capable of it, even though the sceptics might brand him an inexperienced one.

Just wondering if he would reciprocate what Trivandrum did for him. Not that it was a favour, but there are expectations, huge expectations..would he be able to sieve his way through the mess ? Or would his intellect dim amidst the rush ? Either way, its hard time for him. So here’s wishing him good luck.