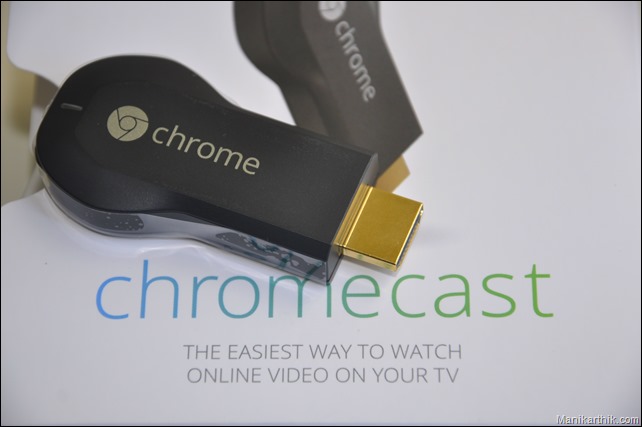 Chromecast is the best gadget investment I’ve made in recent times, hands down! I mean, its the most contributing factor to my entertainment/streaming/living room life today.

I love watching HD videos on my 65inch Panasonic Plasma TV. A good part of what I watch are stuff on Netflix, you know those Alien conspiracy theory documentaries, movies and of course a great deal of YouTubing. I mean, watching those 1080p music videos or movies on your TV with the surround system (I have a Bose Cinemate Series 2), is almost as cool as or close to what you can get to a cinema experience.

Setting up a multiple seat home theater with sound proof room, dark light ambience, full scale recliners and 3D surround will still remain in my to-do list but it feels like I’m near with this thing.

But don’t get me wrong, Chromecast is not “the” thing that I was waiting for, but its a huge step in that direction.

Earlier, though I managed to get things done, there would be a glitch along the way somehow. My TV, though “smart” does not have a browser, but has the Netflix, YouTube, Hulu & Amazon video apps. Good.

So I hook it up to the home network over WiFi and watch movies on Netflix. I could also fire up the YouTube app and watch videos in there. But then the typing part was..well let’s not talk about that even.

So, I used to pair up the TV with YouTube. And for those who haven’ tried this yet, I strongly recommend you do this. You don’t need Chromecast. Just hook up your TV over WiFi it possible and sync between your mobile phone YouTube app and the TV. Once done, you could load your YouTube subscriptions, history and all that stuff on your TV. Pretty neat thing it is! Only glitch, is searching. If you wanted to search for that funny video, you got to do a great deal of fighting with the TV remote, punching in those letters. If synced, you could do the searching on your phone and “Air play” the video on the TV.

And, mind you, you can sync more than one device to your TV. I use an iPhone and my wife uses an Android phone, we have our fights – enough said.

But that’s about it. I could not sync Netflix over from my mobile phone or desktop.

P.S – For all the other home video/mobile video and audio streaming I use the DLNA connectivity between my computers/mobile and TV, so I could play that mp3 file on my laptop as a base station and simultaneously play it on the TV + sound system as well.

After Chromeast, things have become more seamless in the streaming department. YouTube is awesome, it works like it used to do earlier, plus the fact that now I can stream from the browser as well, apart from the phone.

Netflix? Awesome! I can now sync and stream movies from mobile or desktop. Applause!

But the best part, I can no stream any video via the Chrome browser. This is kind of a big deal for me. There are many streaming services that are purely only on the browser, and I was dying to get them streamed on the TV. With the Chromecast, this is super easy!

I’ve been playing the shopping cart game with other streaming devices like Roku, Google TV etc for quite some time now, and boy, glad I didn’t get them. For $35, Chromecast is a steal! Think about all those additional boxes, remotes, streaming monthly subscriptions, switching between input devices on the TV, and dealing with those connection drop outs! Guess I saved all of that with the Chromecast.

Here’s a quick video review I did.