The Scary house owner at Oberon Mall must be a genius 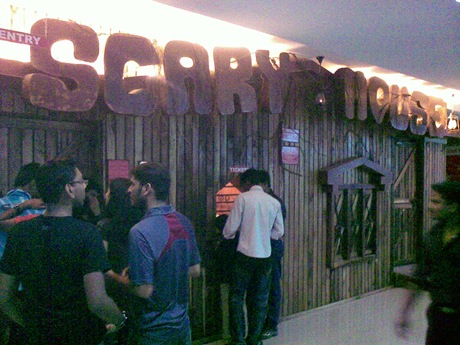 If you’re planning to visit this place soon, this post is going to be a spoiler, suspense killer.

First off, I want to congratulate the man who “formulated” this idea of scary house. My clever guess is that this is the same guy who owns the gaming station in the floor above. How did I guess it ? Read on…

The scary house is of course scary. But it might not be the scare tactics that you’d expect at a multiplex/amusement park. Its the same thing as going “ayyo” when someone jumps in front of you around the corner of your house. But a scare is a scare right ?

There is no animatronics / electronic devices / sound effects what so ever that you have heard of in Disney Land or some amusement park. The whole show is run by four-five chaps who plays the ticket guy, scare monsters, sound effects guy and all that. There is a dwarf too, who’s defenitely going to scare you. (Tip: He sits at different places on different days to keep the random thing going. So don’t expect him at the same place twice.)

That’s why I think he’s a genius. He saves on electricity, no production cost,and a marginal maintenance cost. Wonderful idea.

So if you want to get scared, head to the scary house. If you don’t want to, and thinks this kinda stuff is silly, try setting up a home-scary house right in your home, may be when the power-cuts are on. Would be a better scare.

So where do you start after an economic breakdown ? GM has an answer