Vivo is one smartphone maker known to develop inspirational, customer-focussed devices, packed with just the features needed for a smarter user experience. Vivo V7 is the result of this young global brand’s dedication to introducing the ultimate in photography and pitch perfect sound quality, with cutting edge technology in a smartphone.

Vivo V7 was launched in in India in November 2017, with a price tag of about ?14,000. The smartphone was promoted as a mini or standard version of the Vivo V7+, which was launched in India in September 2017. This was because the V7 came with a V7+ hallmark edge-to-edge Full View screen, with an 18:9 aspect ratio. It also featured the V7+ 24-MP front camera.
Vivo V7+ banked heavily on its ridiculously high mega pixel camera capabilities and fascinating design. Let’s see if the V7 has managed to keep up to the standards set by its predecessor. 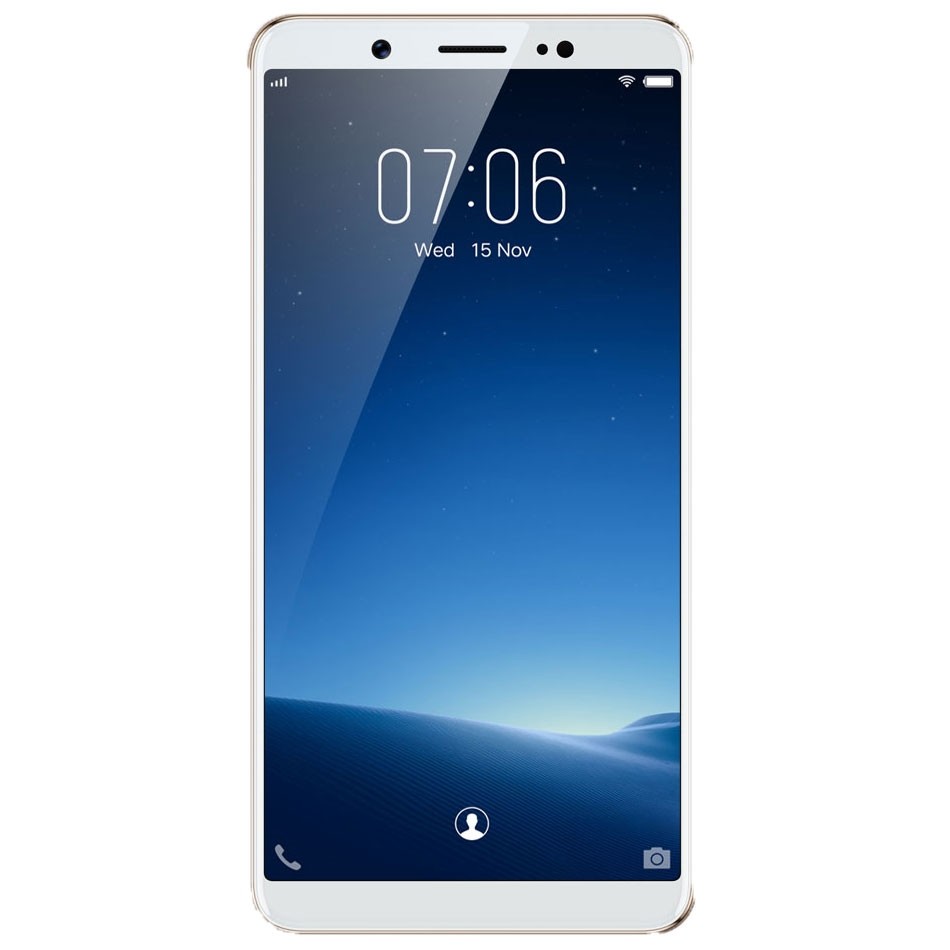 Vivo V7 features a 5.7” touchscreen display, with a resolution of 720X1440 pixels. It is a dual SIM phone that accepts Nano SIM in both slots. Powered by an 1.8GHz octa-core processor, paired with a 4GB RAM, this smartphone packs an internal storage of 32GB that can be expanded up to 256GB with a microSD card. 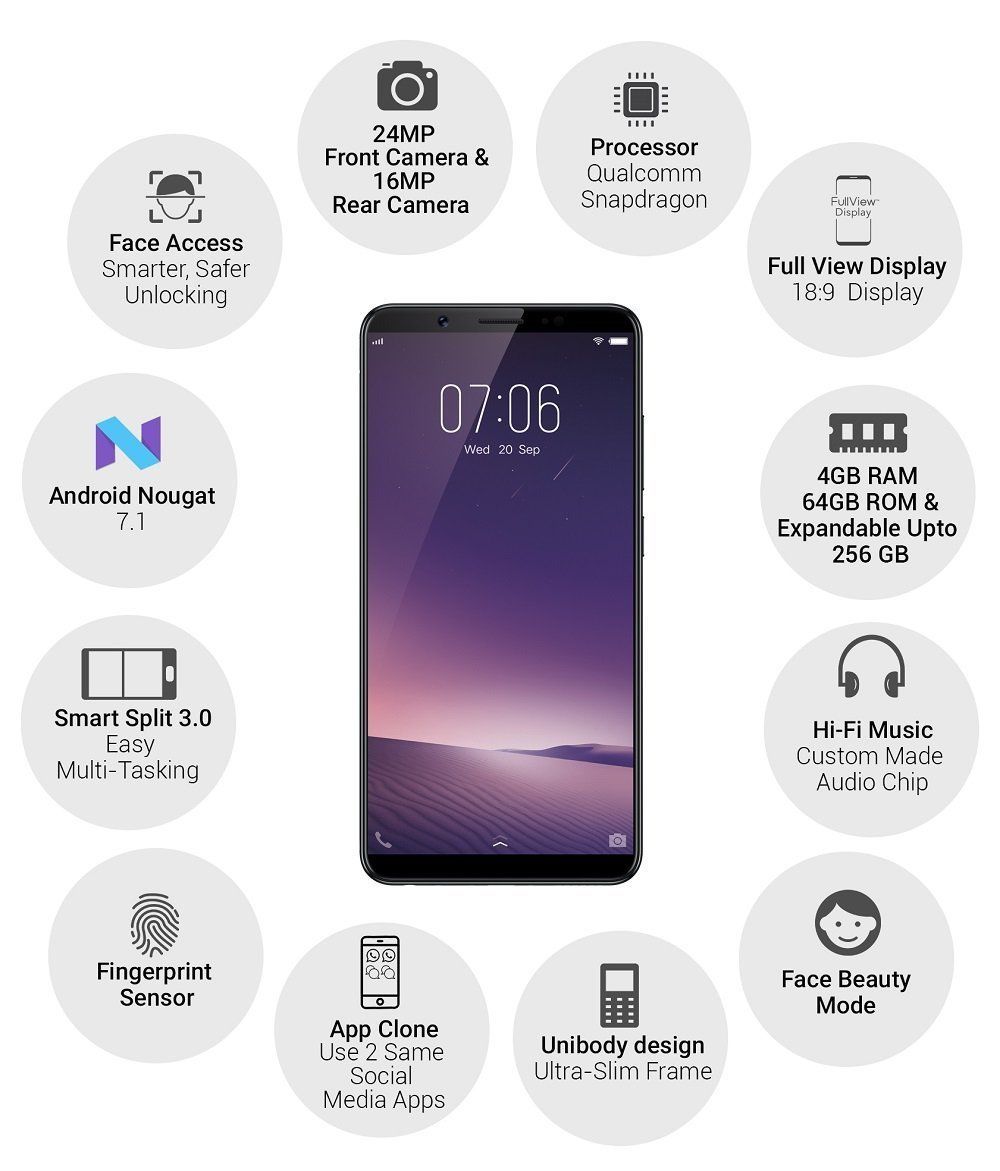 The Vivo V7 features a revolutionary 18:9 FullView Display, with 83.6% screen-to-body ratio and an immersive screen. The sleek design does give it a premium look.
With narrow bezels, aka full-view screen, the smartphone is part of the new wave of mid-range smartphones with bigger screens, while having significantly broken the design monotony we have been enduring in affordable phones for the past years.
When choosing between Vivo’s other models, this ‘perfect selfie’ flagship has to be my undoubted choice.

The device is powered by a 64-bit Octa-core Qualcomm 1.8Ghz processor, along with 4GB of RAM. Compared with its predecessor, this processor is known to provide a much more speedy and smooth performance.
Also, the 4GB RAM allows users to run multiple applications at one time. There won’t be any problem switching between social media apps, complex games and other things with ample RAM.

If you love to listen to music, take photos or watch videos and movies on your smartphone, space is likely to always be an issue. The Vivo V7 comes with internal storage of 32 GB, which can be expanded to 256 GB via a micro-SD card.
The phone runs on the Android 7.1-based Funtouch 3.2 OS, which is sure to make your smartphone experience more fun and exciting. The Vivo V7 is powered by a 3000mAh battery that can last for a day on a single charge.

The major attraction of Vivo V7 is the 24 MP front camera, which is leading the industry at present. This camera boasts higher resolution, which means sharper images, perfect for taking some spectacular selfies. The true-to-life colour and contrasts keep the background clear all the time.

Vivo V7 features an updated Face Beauty 7.0 that adds brightness to the photos and gives facial features better definition, to give the most authentic and natural looking selfies.

The best part about the V7 is that its beauty enhancer is not restricted to selfies but is available during video chats too. When using the video chat app, you just need to select the optimal facial beauty mode.
To get natural photos in low light, the phone has the Moonlight Selfie feature that offers illumination when shooting in dark environments.

On the rear, the Vivo V7 has a 16 megapixel camera, powered by PDAF technology that focuses with super-fast speed to take Ultra HD photos. Its Portrait Mode blurs the background and sharpens the contrast, even in the most chaotic environment, to give the perfect background.

Vivo V7 boasts an amazing feature of shooting multiple frames in quick succession and combining them into one 64 MP shot to create Ultra HD photos.

App Clone: I found this feature in the Vivo V7 extremely interesting. With this feature, you can run one app as two. What this means is that you can use two accounts to log into the same social media app.
Face Access: With Vivo’s Face Access, the user’s face becomes their password. Instead of typing or swiping, you just need to stare at the smartphone. Face Access will scan multiple areas of the face and will unlock the phone if it identifies the biological facial features.
Smart Split 3.0: What happens when a text message comes when you are in the middle of a thrilling movie? Needless to say, you’d need to make a choice between the two. However, with Vivo’s Smart Spilt 3.0, you can split the screen in two or even three to make multi-tasking easy.

Vivo V6 was priced at ?14,400 for the Indian market. This has changed the face of affordable phones we have been seeing so far. Students and mid-income groups, who had been dreaming of owning an iPhone can try this phone for its ridiculously high megapixel count camera.

Reasons I hate this Phone

Vivo V5S Review: The Phone with a 20MP Camera for the Perfect Selfie