I have no idea what Mr. Achutanandan meant when he said – “If it was not for Sandeeps house, not even a dog would have visited them.” I seriously missed it. No clue, no lights what so ever.

For a moment I thought this is a dialogue from some old malayalam movie. Typical. But from a CM of a state which boasts of literacy and all that..that was completely immoral, insensible and pathetic ! 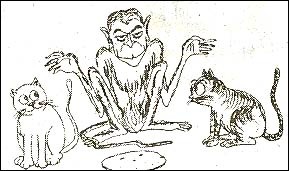 But wait, may be Mr. Achutanandan made a remark that probably went right through my white cells, that I couldn’t understand him. May be he’s talking from a completely different level of understanding, that I couldn’t simply “get” it. You know guys beyond the common mans reach? Let me analyze what he meant.(Or rather try to)

If it was not for Sandeep’s house

Not even a dog would’ve visited him.

“Had it been a common man’s  house, not even a single politician would’ve visited them including him”

That is very true. No doubt !

The problem here is with the media and the rest of us. Mr. Achutanandans level of thinking is definitely on a different plane, and what he actually meant is the above. He did not mean to disrespect the family. All he wanted to do was to go there and let the people know that he visited them, and he cared – because it was Sandeep. (Otherwise you know..)

And he wanted to tell India that he stood with the Martyrs, and he salutes them, for what they’ve done. He might have wanted to visit every Martyrs house, but in the current situation, I don’t think he will go to any other house.

But one thing still fascinates me. How civilized Mr. Achutanandan is and his proficiency in the languages. James Bond should learn from him how a sophisticated man should behave. Seriously.

In an interview with an English channel, Mr. CM said (along these lines)-

Sandeeps mother, Sandeeps family told me sandeeps father his mental  is not good (gestures with finger to forehead).