What Salman Khan don’t want you to blog about 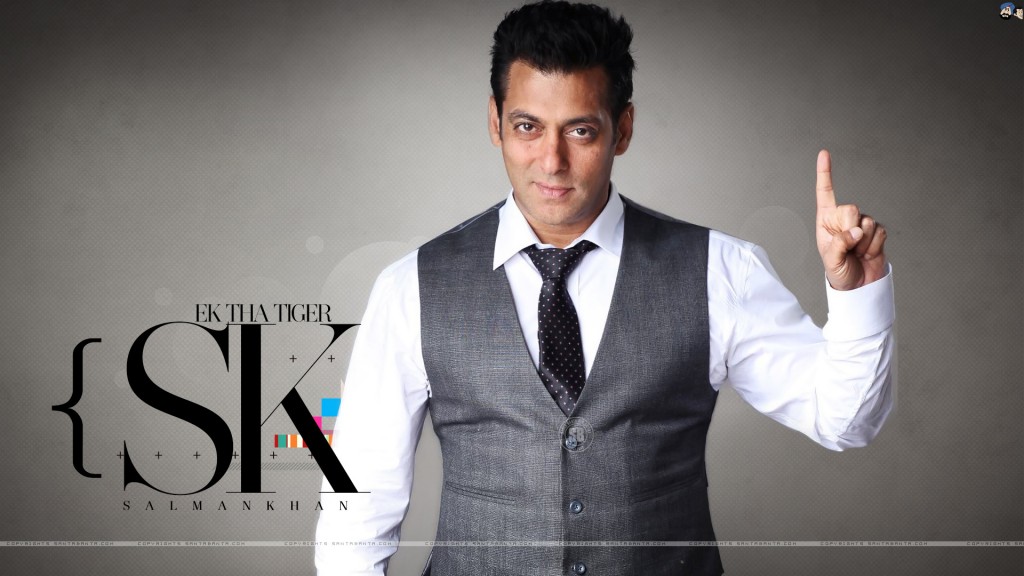 Here’s the thing. Blogger writes about Salman Khan. Salman Khan calls the blogger, gets the article removed. Blogger offers apology – says he’s been through excruciating time and is taking a break from blogging until he’s in the right frame of mind.

First when I heard this story, I thought it’s a joke. It wasn’t.

Soumyadipta Banerjee, a blogger in India writes a story about Salman Khan, that talks very precisely about the “Hit and Run” case against him, the witness therein Mr. Ravindra Patil, and the story about his death (which was already aired on NDTV) and apparently, the blogger receives “communication” from Mr. Salman Khan that the posts be removed from the blog. Blogger removes post and posts an apology note on his blog. (image below) 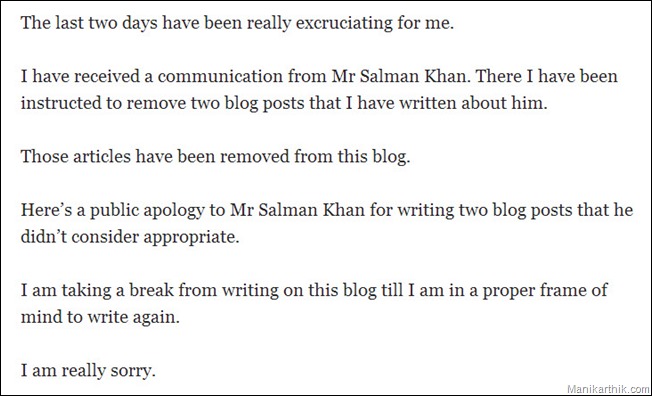 The cached version of the story he published initially (deleted later) here.

Soumyadipta has not made it clear as to why he is deleting the story, apart from the fact that he received “communication” from Salman Khan to delete it. I do not know if the story was false or incorrect.

But from what is seen and can be understood from the post and the apology later, it appears that, Mr. Salman Khan is not happy with the story published and instead of correcting it (if inaccurate), wanted it removed.

This really interests me and makes me curious for two things.

1. Are bloggers/journalists under pressure in India, and limited in their freedom of expression? If yes, what is the right thing to do? What are the options? Could writing about someone (an already published story in this case) prove defamatory? Is it bad?

2. Why did Mr. Salman Khan have the post removed?

Well, that actually makes it more than two, but whatever!

I can’t possibly get answers to these questions myself, hence opening it up for your thoughts.

The article that was removed by the blogger is given below in its entirety. Obviously, this article is either a) completely inaccurate or/and wrong/fake. or b) true and someone wants to brush it under the carpet.

These are not my thoughts, but a duplicate copy, as-is available on Google servers (cached copy).

RAVINDRA PATIL: THE DEATH OF A MESSENGER

In India, the testimony of the prime witness is considered the most important document in a criminal case, which often influences the final verdict.

In the 2002 hit-and-run case of Salman Khan, the man who found himself in the epicenter of the controversy, was the prime witness of the case — constable Ravindra Patil.

Those close to Patil admitted that he was under enormous pressure to change his statement.

There were many who wanted Patil to change his statement. They preferred that Patil maintain that Salman leaned back to listen to him seconds before he lost control of the wheel. This would mean that the accident was caused by a ‘human error’ and not because he was drunk.  Some people wanted him to say that Salman was not drunk at the time of the accident.

Whatever be the case, Patil did not change his statement till the last day.

It was unclear who was putting pressure on Patil — some say they were all ‘well-wishers’ of Salman Khan from the police force while others say that those talking to Patil were Salman’s common friends from the film industry. Whoever they were, the pressure tactic seemed to be working as Patil was showing signs of a nervous break-down.

Why was Ravindra Patil so vulnerable?

Patil was a constable and hence belonged to the lowest rung in the police force. He admitted numerous times that he was under pressure and he would always try to duck the media.

During 2006, when the examination of witnesses was on, Salman had hired the best lawyers in Mumbai who were all charged up to cross-examine Patil. But then, something unexpected happened. Patil just ran away one evening. His brother lodged a missing report about Patil at a local police station.

Day after day, Patil chose to skip court dates because he didn’t want to face the defence lawyer. Soon, Patil came under scrutiny of the court because he remained absent at the court hearings. The court proceedings were stuck because Patil was absent in the witness-box. It also came to light that he had run away without applying for leave.

In a strange twist of fate, a man who had actually lodged the first information report against Salman Khan now had an arrest warrant issued against him for not turning up at court hearings. The arrest warrant was issued after he failed to appear for five consecutive court dates.

As the judge ordered that he be arrested and produced in court, his seniors at the police force simultaneously approved that Patil be sacked from his job because he was absent from duty. His seniors chose to ignore the fact that technically Patil was ‘missing’ and not ‘absent’ according to their own records.

Nobody was interested in knowing why he had run away from his house. Or, why the same person who was so forthcoming in lodging a complaint against a Bollywood star like Salman Khan, didn’t want to take the witness-box. Patil was never put under any witness protection programme.

Patil was sent to Arthur Road jail with hardened criminals

Like how they deal with a hardened criminal, a task force was prepared to nab Patil and find out where he was ‘hiding’. Finding him was easier than anybody had thought because Patil was not hiding anywhere. Ravindra Patil was actually staying in a small hotel in Mahabaleswar, just a few kilometres away from Mumbai. He would come to Mumbai often to meet his wife and family. He was not on the run from the police and was going around telling everybody that he wanted to stay away from the Salman Khan case.

He had repeatedly requested his colleagues in Mumbai Police to work out a way so that he can be spared from the case. The problem was: He was the prime witness and without him the case didn’t stand a chance in a court of law.

How many of you hate going to court? How many of you don’t like how witnesses are grilled in criminal cases by defence lawyers? Well, if I go by Patil’s example, then all of you should be put in jail. Believe it or not, Ravindra Patil was sent to jail because of this ‘crime’.

The special police team swooped down on him, arrested him and produced at the court, the next day. The court sent him to Arthur Road jail, the  biggest jail of Mumbai where most of the high-profile criminals are lodged.

Here are pictures after Patil’s arrest post a raid at a Mahabaleshwar hotel.

In Arthur Road jail, Ravindra Patil was incarcerated in a separate cell like they would treat an armed dacoit or a serial killer. Patil submitted fervent pleas that he doesn’t want to be grouped with criminals at the Arthur Road jail but the court was in no mood to relent.

Twice, Patil filed applications saying that he is a witness and that he be held at Unit nine of the Crime Branch and twice the court ignored the application. In his applications, Patil went on record saying that he went absconding as he was mentally disturbed at the thought of being cross-examined by defence lawyers. But nobody seemed to be interested in what he was saying.

If the courts didn’t pay heed to his pleas, his employers — the Mumbai Police — seemed to be on some revenge spree. A ‘missing’ Patil suddenly became an ‘absconding’ Patil in their own files and subsequently sacked from his job. This junior-most employee in the force tried every trick in the book to convince his senior officers that he should not be sacked from his job. But nobody was ready to listen.

A witness was suddenly at the receiving end of it all. Life was dealing this grand witness blows after blows while Salman Khan delivered hits after hits at the box office.

The last days of Ravindra Patil

After Patil was let out of jail, he found himself in a strange situation — his family had disowned him and the Mumbai Police was not ready to take him back. Patil didn’t know what to do — suddenly he was the victim because he saw the accident and spoke about it.

A broken man by then, Ravindra Patil went missing again.

Patil was finally discovered at the Sewri Municipal hospital in 2007. Patil was begging on the streets of Mumbai before he landed up at the hospital. The years of acute stress coupled with heavy drinking had made his body weak. Worse, he had contracted a drug-resistant tuberculosis which fast tracked him towards an inevitable end.

Patil wanted to get back in the police force but he was just a bag of bones lying on bed number 189 of ward number four on the fourth-floor of Sewri TB Municipal Hospital. His family members were not aware where he was and nobody had come to see him for a year.

Here are some moving pictures of Ravindra Patil, just days before his death.

Even after his death, there was nobody to take back his body. The friend who had admitted him to the hospital was so scared that he didn’t even inform his family. In the end, his brothers came forward to perform the last rites.

Before his death, Patil spoke to his friend expressing his wish to get back to the force again while throwing up blood on the cold floors of the Sewri Municipal hospital.

“I stood by my statement till the end, but my department did not stand by me. I want my job back, I want to survive. I want to meet the police commissioner once,” were his last words.

Clearly, even God chose not to hear him.

Constable Ravindra Patil’s eye-witness accounts are still the most important documents in the 2002 Hit-and-Run case involving Salman Khan. It is now a case of homicide after a thorough re-examination of other witnesses.

Salman Khan faces a 10-year jail term in the case if he’s convicted.

Before we end, here is a news report about Patil after he was discovered just days before his death.

Why I support Narendra Modi and why we should