I’m not trying to be pessimistic about it. In fact, the Tata Nano has given us more reasons to get excited – in all ways.

Now, that Tata Nano is out soon, and the bookings have started people are breaking out of the “dream bubble” and has become thoughtful about the reality more than the hype. Or so am I to believe from the comments seen here. People have expressed their concerns over the Tata Nano car being a problem rather than a solution.

Some of the raised questions are, whether the Indian roads can hold so many cars, so much that one Nano for each ? I don’t want to guess the numbers here nor do I want to believe that every person who has 1 Lakh rupees will buy the car. But if at least the traffic increase by 5% due Tata Nanos I’m sure it will only make the situations worse on the roads.  Of course, not so much that it becomes manic, but considering the fact that we Indians have our own judgments and rules that we can maneuver even a limo on M.G Road quite easily, its definitely worth a thought. 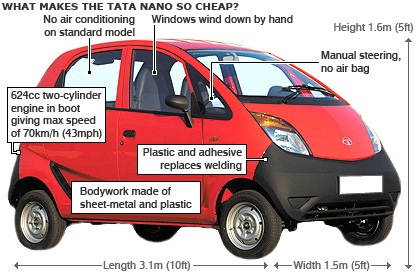 Traffic problems have always been there and whether the Nano is out on the roads or not is not a problem. We will still love the huzzle and buzzle of traffic even with our bikes out. But Nano certainly looks like a “problem creator” for other players like Maruti and small segment cars.

So that means, even if the Nano cannot make a big impact on the roads, may be when others cut their prices closer to 1 Laksh,(which is most likely possible) it does mean something. More cars > More traffic > Less parking space > More honking !

I dunno, may be I’m just getting overly sulky. But I definitely don’t like traffic jams, be it Nano or otherwise.

( P.S – Last day on M.G.Road Cochin, I spotted a limo version of Scorpio (or something similar couldn’t make out) pass by. Wah ! I must congratulate that guy whoever is in the driving seat. If I had been in his position, I would straight away ride it to my car porch, without stopping anywhere. I cannot even if I wanted to.)