Well, at least me.

A gut feeling, or gut reaction, is a visceral emotional reaction to something, and often one of uneasiness. Gut feelings are generally regarded as not modulated by conscious thought, and as a reflection of intuition rather than rationality. They are thought to originate from the brain’s insular cortex.

That’ what the Wiki says. I don’t know if that’s the best definition but it sure is close. 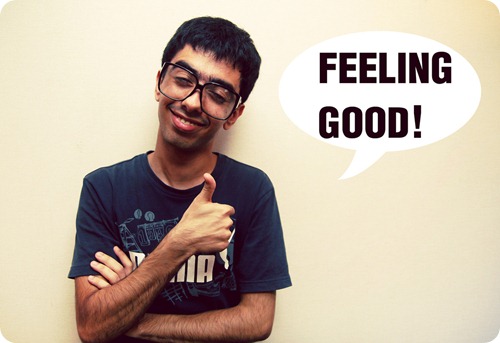 I prefer to speak from experience. And I’ve always screwed up in making decisions, every fucking time.

But that’s okay. At least, it gave me a chance to realize what I was doing wrong. There are no mistakes, there are  only experiences. A mistake is one, only when its repeated, you never repeat it when you realize the mistake – that’s experience.

And every time you’re faced with a problem or a question, you have the answers well within you. Its just that we overlook it by making it even more complex. We as human beings, takes pleasure in making things complex and hide within it seeking shelter. We prefer to do so, because it appears to you for a while that the problem itself is solved, because you don’t have to deal with it.

We are always wrong, that way. Now, that’s being human, one may argue, but being human is also about making the right choice as well. Its always have been about choices right?

Had I gone to the IIT…

Had I studied well…

Had I known in advance…

Had I saved last year…

Its always about not doing something while you knew what you were supposed to do that creates a problem.

And that’s why I go for the gut feeling. I could be wrong, but I’d gladly be. Because from my experience, your gut feeling is the closest you can get to the right decision. Well, what is “right” is a relative concept. What appears “right” to me may not appear right to others, but at the end of it all, you are responsible for your decisions and mistakes, so you better be selfish there.

Gut feelings are always right. Period. I remember having read somewhere that you should listen to your inner voice. I never figured what an “inner voice” is, except for stomach growls, when I’m hungry.

May be we should use simple terms when explaining such things. “Inner voice” is most likely your gut feeling – or so I prefer to believe. Because, as I said they come from your own thoughts, beliefs, convictions and analysis. Its your body’s natural and the most purest thought.

But…they are not easy, or don’t appear to be in most cases. Our secondary thoughts are more powerful and overtake the inner voice in most cases. Just let it be, for you don’t need to make haste decisions. When ever I’m faced with a questions, I analyze every possibility.

“Should I eat this burger?”

“You’ll put on couple of calories.”

“What is the worst that could happen?”

“Eat it. You could burn it biking back from work.”

I go for it. There’s always an analysis. And the most important is to figure what’s the worst that could happen in any situation.

Once you know what’s the worst that could happen, prepare for it and go for it! And that’s your gut feeling.

It probably will keep you away from facing the problem for a while, but won’t give a solution. It’s a scam. Stay out.

Go head on facing a problem. Hit it in the face first. If you think you have to make something clear to someone, speak up. If you miss some one, tell them so, don’t think about the consequences or call in a reputation management agency to figure what they will think of you.

This is what you are supposed to do here. So do it. If your gut feeling, suggested you to do something, listen to it, its very likely that it’s the solution. Don’t fuck it up, thinking too much.

You’ll enjoy it after a while and probably will even laugh at it, realizing how silly you were.

That’s life. Its simple. And there are answers to any problem. Listen to yourself, your gut feeling.

Some common phrases, terms, lingo and jargons used by VCs