Finally, some breath of fresh air for NRIs in the UK.

Indian Bank of the UK has announced that it will accept Rs.500 and Rs.1000 notes via its UK branch and NRIs who have up to Rs.10,000 in hand can get it exchanged at Indian bank.

“Our endeavour is to help everybody. We have asked Delhi about it (any banned notes with NRIs). I have a feeling we will work out something so that people who have carried certain amount of cash in their pocket, should be able to deposit it in any Indian bank abroad,” Dinesh Patnaik said. (Source)

This brings good news to all other NRIs as well. Here in the USA, no banks (Indian or otherwise) so far have agreed to exchange Indian Rupee notes from NRIs. But I’m hopeful that with such measure, they will start similar attempts too.

From sources, I understand that banks are willing to do the exchange, but they aren’t sure of what the Govt. stand will be. If they get a “yes” from the Govt. they too will begin arrangements to accept Indian Rupee notes from NRIs.

As previously noted, some foreign currency exchanges in the USA had mentioned that they are pausing accepting Indian Rupees, but with clarity from the Govt. they mentioned will un-pause it.

Hopefully that will happen soon.

Bank of India has issued a public notice that they are not accepting any Indian Rupees in UK as of yet. See notice posted on their official website below. 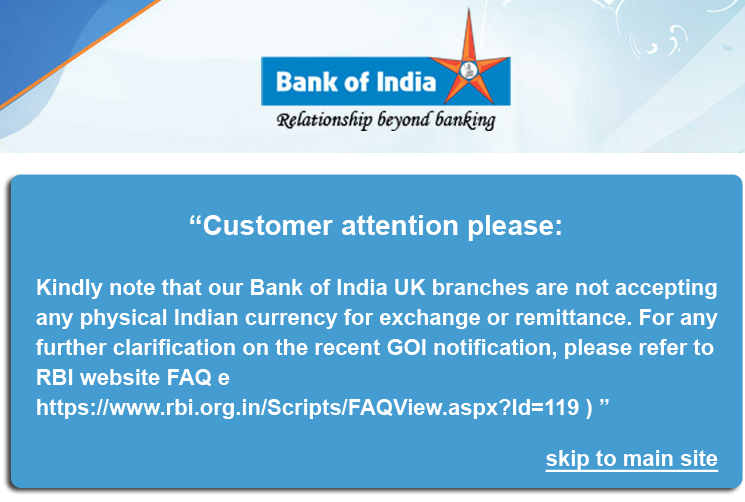